The €3,300 WPT Amsterdam Main Event starts today and we’re the tour’s Official Travel Partner so let us help you find great accommodation in beautiful Amsterdam. There are two start flights so you have plenty of time to get there! 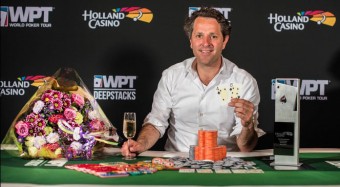 Menco, a 40-year-old father of three, saw off a field of 243 to win the WPTDeepstacks  event, awarding him a prize more than four times his total live tournament winnings to date, along with coveted trophy and €2k WPTDS Europe package to the season-ending event.

Menco started the final day as the short stack but put on a dominating performance of well-timed aggression to eliminate three players and eventually walk away as the champion. Coming into heads-up play against Pim van Wassenberg, Menco had a chip advantage of 2:1, but it was Van Wassenberg making all the moves and he quickly seized the lead. However, a flip gave Menco a vital double-up and, in the final hand, he rivered a flush against Wassenberg’s two pair. Scotland’s Richard Milne was sixth for €12,615 and top Canadian pro Ami Barer was eighth for €91,170.

The next WPTDeepstacks event is on the French Riviera starting May 30 when WPTDeepStacks teams up with PMU.fr for WPTDeepStacks Cannes at Le Croisette Casino Barriere.

Finnish pro Juha Helppi is leading 24 players through to Day 2 of the €6,000 WPT Amsterdam High Roller. Helppi has 351,500 but is being chased by some of the world’s top players including the legendary Steve O’Dwyer who has also pitched up to Holland Casino and is currently lying in sixth place with 205,500. Others still in contention include British businessman Paul Newey, EPT1 Grand Final champion Rob Hollink, Noah Boeken and British pros Jack Salter and Tom Hall. There were 70 entries yesterday and but players have until the start of day 2 to enter this event. The prize pool is already close to €400,000.