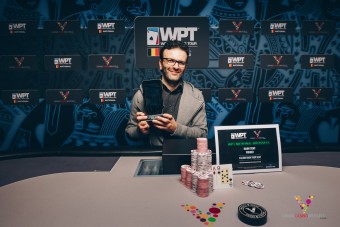 Sergio Castelluccio, one of Italy’s top live tournament players, has won the record-breaking WPT National Brussels for €105,000. There were 489 entries in the £1,200 Main Event, a record for the Brussels stop, generating a €521,760 prize pool with 55 players getting a share. Castelluccio already has a string of great results including fourth at the EPT Grand Final in 2012, winning the Italian Poker Tour Sanremo Main Event in 2010 and victory in a WSOP Circuit event in Campione in 2015.

Castelluccio, who hails from Avellino, near Naples, is a musician and former music teacher who took up poker nine years ago, saying “I’ve always had a passion for games, like chess – also and too many video games!” He also finished 16th at the EPT Grand Final in 2009 for €64,000 – one of his first ever live events. He’s a regular at live events all over Europea and has two final table appearances on the Italian Poker Tour as well as his Sanremo victory.  His win in Brussels was his first ever WPT cash and brings his total live tourney winnings to well over $2 million.

Castelluccio entered the final table fourth in chips, with Greek pro Dimitrios Kalaroutis in sixth place. Despite being the shorter stacks at the start of the day, the pair made it to heads-up play after around 8 ½ hours, with Castelluccio seizing victory just 90 minutes later.

Next up for the WPT National tour is WPTN Korea at Paradise Casino at Jeju Grand in Jeju-do, South Korea. The festival runs March 16-21. Main Event Travel is the tour’s Official Travel Partner so do check for hotel deals here.