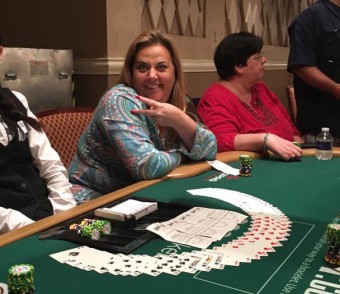 Deborah Worley-Roberts - second in chips in the WSOP Ladies Championship - has achieved her biggest ever live cash, and is tantalizingly close to her first ever World Series gold bracelet.

The UK-based American thrived throughout Day 2 yesterday and there are now  just five left in contention for the top prize of $135,098. (Pic by London Hippodrome Ambassador Kelly Saxby)

Worley-Roberts, who lives in Hove next to the popular seaside town of Brighton on the UK South coast, has 821,000 but faces a tough battle against Australian Heidi May who has a substantial lead with 1,752,000. All five players are now guaranteed at least $29,256.

She is being cheered on in Vegas by a whole bunch of UK-based players who took part in the event including Sin Melin, Unibet Ambassador Daiva Byrne, partypoker’s Charlie Godwin and Hippodrome ambassador Kelly Saxby – along with hundreds of members of the “Ladies at Unibet Poker” facebook group. 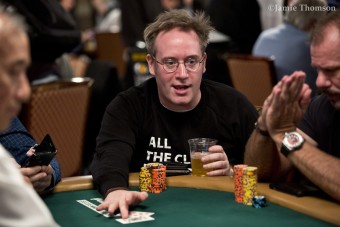 The WSOP Main Event is underway! We’ve already booked more than 3,000 hotel nights for 888poker qualifiers and other players. If you need a room, let us know – and don’t forget our awesome Dollar Delivery Service! The final Main Event start flight is Day 1c tomorrow.

The WSOP Main Event kicked off yesterday with the biggest Day 1a since 2013. There were 795 players with Sam Grafton now second in chips with 231,600. Danish pro Morten Mortensen is leading the 576 survivors with 276,000.

Commiserations to Benny Glaser who narrowly missed a fourth WSOP bracelet after finishing in fifth place in the $1,500 Razz event for $27,503. Simon Appleby, Scott Margerson, Sebastian Saffari and Charlie Carrel all had deep runs in the $3k NL tourney which attracted 1,349 entries. So far, British and Irish players have won well over $7 million at this year’s World Series – with five bracelets. Congrats to Liv Boeree, Chris Moorman, Chris Brammer, Max Silver and Elior Sion for their victories!