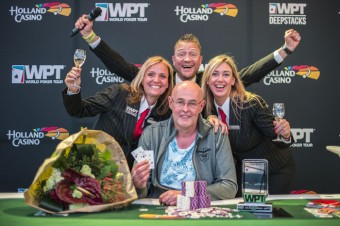 Hollink, who won the very first EPT Grand Final back in 2005 and was inducted into the Dutch Poker Hall of Fame last November, snagged €139,000 for his victory. He now has live tournament winnings of more than $3.4m. Hollink beat the UK’s Enzo del Piero heads-up with Juha Helppi third and last year’s winner Robert Soogea fourth. British businessman Paul Newey “min-cashed” the event in ninth place for €13,935. There were 72 entries in all creating a €398,088 prize pool.

Chile’s Sebastian Ruiz is leading the €3,300 WPT Amsterdam Main Event which kicked off yesterday with 80 entries.

Players can enter WPT Amsterdam up until start of play on Day 2 tomorrow so there’s still time to join in the fun. We’re the tour’s Official Travel Partner so let us help find you a great place to stay.

The next WPTDeepstacks event is on the French Riviera starting May 30 when WPTDeepStacks teams up with PMU.fr for WPTDeepStacks Cannes at Le Croisette Casino Barriere.