Ting Ho is leading the 111 players who made it through Day 1b of WPT Rolling Thunder yesterday with 181,300. There were a total of 210 players in the field. The combined total field is 376 and counting. Registration remains open until the beginning of Level 11 (about 2:15 pm on Day 2), and players are allowed one entry on Day 2, so the field size still has some room to grow. 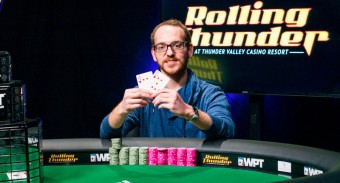 Harrison Gimbel, who won last year’s event, is also still in but very short-stacked. He beat Mohsin Charania heads-up for his first WPT title in 2016 winning $275,112 for first.

Ho, who has $373k in live tournament winnings, won the Wynn Classic in 2012 for $51,876. She travels the tournament circuit with her poker-playing boyfriend Rex Clinkscales. She doesn’t play that many events but decided to jump into a satellite at Thunder Valley and won herself a seat to the $3,500 Main Event.