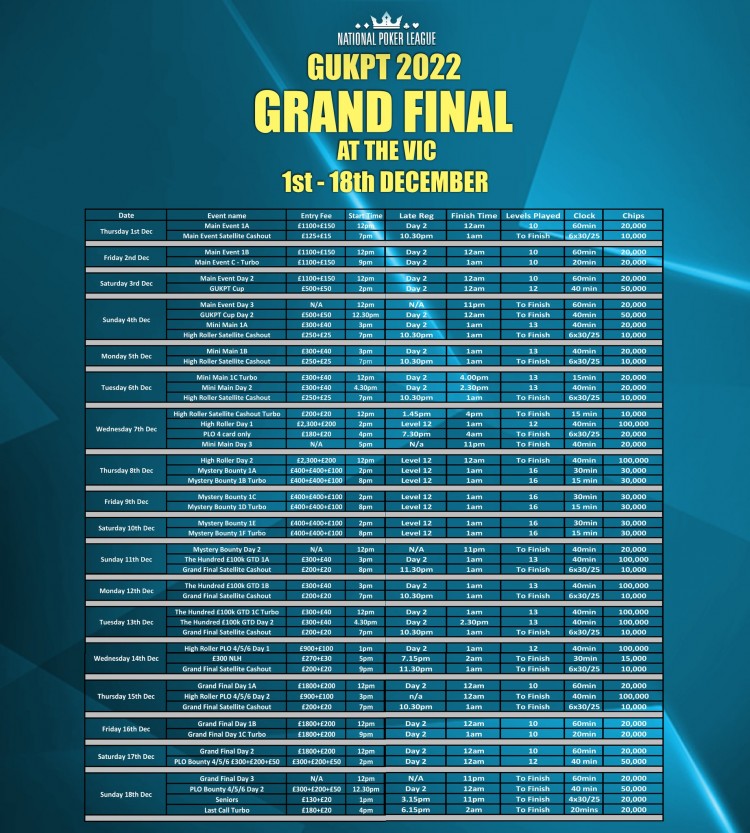 The hugely popular Grosvenor UK Poker Tour is back in London next month for its annual Christmas extravaganza at the Poker Room at the Grosvenor Victoria Casino.

The 18-day GUKPT Grand Final is the premier festival of the year for the UK’s longest-running poker tour  – now nearing the end of its 15th season – with hundreds of players heading to the Poker Room for a stab at some giant huge prize pools.

The GUKPT Grand Final festival will run December 1 to December 18 and this year has more than 20 different tournaments on the schedule including the new GUKPT Cup, the GUKPT London Main Event, a Mystery Bounty event –with six starting flights (!) – and the Grand Final tournament itself.

GUKPT Cup
Next up is the £500 + £50 GUKPT Cup – a brand new event on the tour which made its debut at GUKPT Blackpool a few weeks ago. Grosvenor Ambassador Katie Swift also has her eye on the GUKPT Cup and says it was a particular hit with women players at Blackpool as it plays out over the weekend.

She said: “I knew the new GUKPT Cup event would be huge as soon as I saw it on the Blackpool schedule, but it was even more popular than I had expected! I have a WhatsApp group with over 100 female players in it which was buzzing as soon as they saw it on the schedule. Loads of players travelled specifically to play this event and I’m sure the same will happen in London. It’s a great addition for those that want a smaller buy-in than the Main Events and for those that can only play poker at the weekends. The 50,000 starting stack is also very appealing!!”

Matt Davenport, the leading contender for Player of the Year, won the inaugural event for £40,000 after beating a 320-entry field in Blackpool.

MainEventTravel can take care of all your travel and accommodation needs during the GUKPT Grand Final – whether you are aiming for a luxurious stay or more budget option. MainEventTravel.com is the GUKPT's Official Travel Partner and has great deals for London hotels.

Mystery Bounty
A lot of this year’s schedule is devoted to the hugely popular Mystery Bounty event. The format was first introduced to the tour in July at Reading and was also on the schedule for Goliath X. The Grand Final’s £400 + £400 + £100 buy-in edition will give players plenty of chances to take part with six different starting flights (including two turbos) and two re-entries allowed per flight.

The Mystery Bounty certainly has appeal for 2021 Player of the Year Euan McNicholas, who has finished fourth in the recent GUKPT Blackpool Main Event. He said: “After such a great result in Blackpool, I can’t wait for the Grand Final and am hoping to take the good momentum forward. I will be playing everything on the schedule but I especially can’t wait for the Mystery Bounty event. For £900, everyone playing has a big chance of pulling a huge bounty. It’s a really exciting, fun format and it’s great to see these tournaments become a regular part of the schedule. Everyone playing them always loves it and it creates a buzz around the poker room!”

Grand Final
The £1,800 + £200 buy-in GUKPT Grand Final gets underway on December 15. The event features three starting flights, a 20,000 starting stack and two re-entries per flight. Last year’s winner was Andy Moc who scored a career-best cash of £256,350 after outlasting a 607-entry field. The £1,092,600 prize pool was the largest ever Grand Final in the tour’s long history.

The Poker Room – often dubbed the home of UK Poker – will certainly be buzzing for the Grand Final Main Event. Grosvenor Ambassador Katie Swift said: “I plan to be present for pretty much the duration of the Grand Final in London. The schedule looks incredible, we’re so spoilt for choice! I really don’t know which event I’m looking forward to the most but I’ll also be looking to play some cash games at the Vic. They run around the clock in the capital and Grosvenor has made it super easy to add yourself to cash game lists via the “Poker Live” app. Obviously, I’m also hoping I’ll win a share of the juicy “Bad Beat Jackpot”!

PS If you can’t make it to London for the Grand Final, don’t worry! It’s less than two months until Leg 1 of the 2023 GUKPT season which starts January 12 at the Poker Room.

The GUKPT has already announced all the dates for next year which will be the tour’s 16th season. Following Leg 1 in London, next up will be GUKPT Manchester in February, then Blackpool in March, Edinburgh in May, Luton, London #2, the second trip to Luton, Leg 8 in Leeds, Blackpool #2 and then back to London for the Grand Final.  Not to mention the new Grosvenor UK Poker Open event starting February 25 in Coventry and Goliath in July, also in Coventry. That’s a lot going on – but luckily you can start your planning now with MainEventTravel.com! 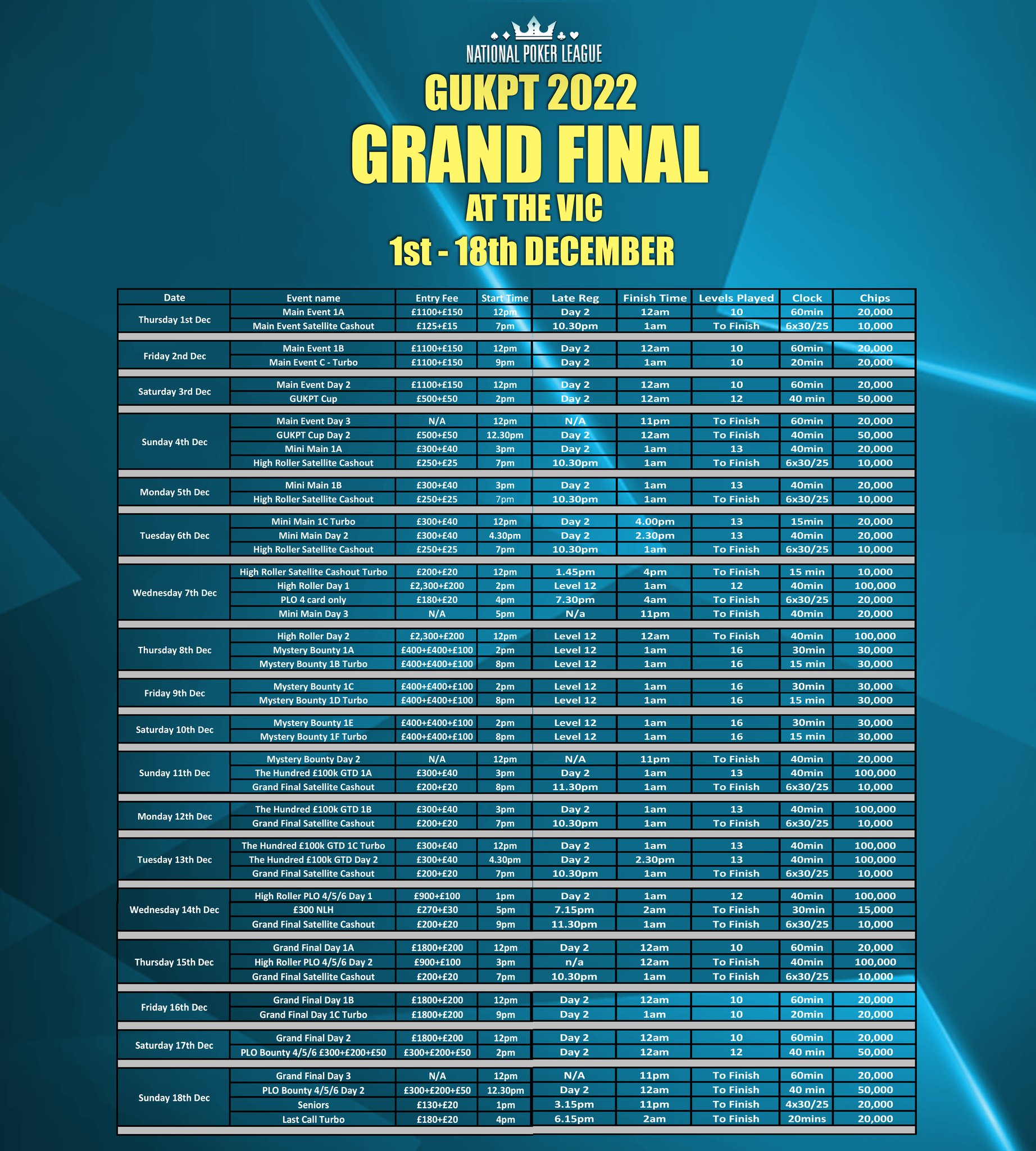