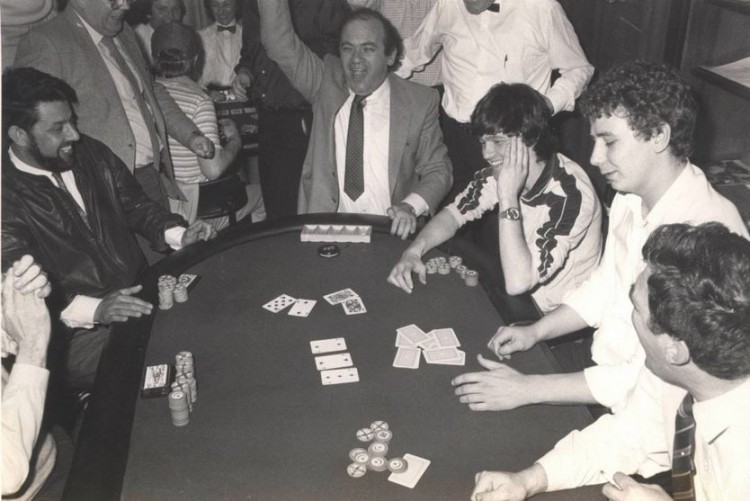 The Irish Poker Open’s illustrious past

Thousands of poker players from all over the world will be making their annual pilgrimage to Dublin next April to take part in the Irish Poker Open. The €1 million guaranteed event – which is taking place at the Royal Dublin Society from April 3 to April 10 next year ­– is considered an absolute must on the international poker calendar and always attracts a stellar crowd.

However, what many Irish Open entrants don’t know is that they are competing in a truly remarkable event, the longest-running No Limit Hold’em tournament outside of Vegas with a history going back more than 40 years.

The Irish Poker Open was first held in 1980 by maverick Irish bookmaker Terry Rogers. Rogers, a well-known and well-established bookie in Dublin was a real poker fan who had been hosting stud and draw tournaments at his Dublin “Eccentric Club” throughout the 70s.

At the time, No Limit Hold’em was starting to make an impact in the States but was virtually unknown on this side of the pond. That all changed when Rogers visited Vegas during a business trip to the USA. There he met the legendary casino owner Benny Binion and started befriending players at Binion’s high-stakes poker games. In 1979, Rogers took part in the World Series of Poker event – which was then held at Binion’s celebrated Horseshoe casino – and realised just how exciting and thrilling Hold’em could be.

Up until then, poker in Europe was dominated by stud and draw, but Rogers’ passion for the new variant was contagious and helped kick-start the game’s dominance across the Continent.

In 1980, Rogers held the first Irish Poker Open. It was won by Irish player Colette Doherty who actually won the Irish Open twice, taking it down again in 1991. She also hit the spotlight for being the first European and first female player to compete at the World Series.

The real game-changer for the Irish Poker Open however came in 1984 when a group of around 25 Americans travelled to Ireland to play the tournament at Killiney Castle. The group included the reigning World Series of Poker champion Tom McEvoy as well as two times World Champion Stu Ungar, Chip Reese and Doyle Brunson. The £1,000 buy-in Main Event attracted widespread TV and press coverage in Ireland and put the Irish Poker Open firmly on the map.

When Terry Rogers died in 1999, his long-time friend and colleague Liam Flood took over. Flood was one of Ireland’s most celebrated poker players and had already won the event twice – in 1990 and 1996. Flood was responsible for taking the Irish Open from a smallish event to one of the largest and most prestigious poker tournaments in the world.

Flood died in 2014 and the Liam Flood Memorial Championship Event has been held in his honour ever since. The €250 turbo is one of the flagship events of the Irish Poker Open schedule and takes place next year on April 9.

Today the Irish Poker Open has grown to become one of the most popular and important fixtures on the international poker calendar. The annual event, now in its 42nd year, has played out at many different venues – from its humble start at the Eccentric Club in Dublin to the Merrion Casino, Killiney Castle, the Burlington Hotel, Jury’s, CityWest and next year – for the first time – the historic Royal Dublin Society in Ballsbridge.

In 2016, Paul O’Reilly and JP McCann took over the Irish Open – bringing the buy-in back down to an affordable €1,150 (from €3,200) and slapping on a €500k guarantee. Their vision for the event was a festival of poker that would attract players of all kinds. Their vision was spot on; the very first event smashed the guarantee with 802 players competing and over €800k in the prize pool.

O’Dwyer, who has lived in Dublin for the last ten years, beat a field of 2,040 entries in his home city to win the first prize of €318,700. In a stunning display of poker acumen, the honorary Irishman bulldozed his way to victory by eliminating all eight of his final table opponents – including former champion Patrick Clarke. The prize pool was close to €2 million but O’Reilly and McCann are expecting even more entries for the 2023 edition which is taking place from April 3 to April 10.

The Irish Poker Open is an event with a truly illustrious past and it’s clearly heading to an even more exciting and distinguished future.

The Irish Poker Open takes place at the Royal Dublin Society from April 3 to April 10. MainEventTravel is the Official Travel Partner, making it easier than ever to sort out everything you need to take part in the longest-running NLHE tournament in Europe all in one place: flights, hotels AND Main Event buy-ins.